Nature Based Pre-Schools Are Best For Young Children 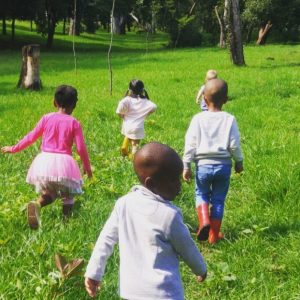 Nature based schools are gaining great interest with modern, working parents. This trend has grown over 800 percent since 2012. Nature based preschools with daily exposure to nature has proven to be a vital element in early education for young children. Our Montessori preschool positioned in a beautiful, tranquil, country setting, with weekly nature walks, brings our children much joy! Guess what? Last week we noticed two white eyed owls in the school parking lot!

The extract below is written by Danielle Cohem

Why Do Children Need to Spend Time in Nature?

They may prefer to stick to their screens, but here’s why getting outdoors matters.

In the early 1980s, a Harvard University biologist named Edward O. Wilson proposed a theory called biophilia: that humans are instinctively drawn towards their natural surroundings. Many 21st century parents, however, would question this theory, as they watch their kids express a clear preference for sitting on a couch in front of a screen over playing outside.

The national panic about kids spending too much time indoors has become so extreme that the crisis has a name: Nature deficit disorder.

While calling it a disorder might be merely rhetorical, it’s clear kids spend significantly more time inside than outside. This shift is largely due to technology: The average American child is said to spend 4 to 7 minutes a day in unstructured play outdoors, and over 7 hours a day in front of a screen.

Richard Louv, author of the book Last Child in the Woods: Saving Our Children From Nature-Deficit Disorder, tells the story of interviewing a child who told him that he liked playing indoors more than outdoors “cause that’s where all the electrical outlets are.”

Increasing parental fears about diseases and dangers of playing outside—despite evidence to the contrary—are another big factor.

And as suburbs and exurbs continue to expand, nature is parcelled off more, and kids seem less inclined to spend time in a fenced-in yard, let alone jump the fence into a neighbour’s or walk in the woods. Instead, indoor activities can seem easier (no sunscreen necessary!), safer, and even more sociable for kids who are growing up with multiplayer video games and social media accounts. 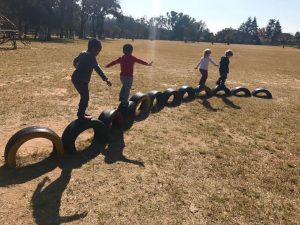 Recent studies have exposed the benefit—even necessity—of spending time outdoors, both for kids and adults. Some argue that it can be any outdoor environment. Some claim it has to be a “green” environment—one with trees and leaves. Others still have shown that just a picture of greenery can benefit mental health. These nuances aside, most of the studies agree that kids who play outside are smarter, happier, more attentive, and less anxious than kids who spend more time indoors. While it’s unclear how exactly the cognitive functioning and mood improvements occur, there are a few things we do know about why nature is good for kids’ minds.

So while screen time is the easier, more popular choice, it’s important to set aside time for outdoor play. For fun, stimulating activities you and your kids can do in nature, see Ideas for Getting Your Kids into Nature.

The pictures in this post are in our school surroundings at Fields Montessori. Find out more about this school in Parkmore, Sandton, Johannesburg on the website.

TwitterFacebookPinterestLinkedinEmail
This entry was posted in Outdoors. Bookmark the permalink.