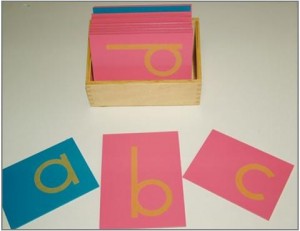 In the Montessori approach, the sounds of the letters are taught before the child is introduced to the names of the letters. Research has shown that it is best to learn one thing at a time. It is too much to have to remember both names and sounds. If the child is taught both the names and the sounds in the beginning, it has been found that the child gets confused when trying to sound out a word because it is difficult to remember which the letter represents. Therefore, to avoid the added difficulty, the phonetic sound of each letter is taught first, and the names of the letters are taught later. In addition, since some letters can represent more than one sound, the other sounds which are less frequently used than the phonetic sound are also taught later. In this way, the child only has to learn one sound for each letter in the beginning.

In addition, since sounds obviously occur in all parts of words, children are led to hear the sounds in the different parts of a word. It is a mistake to think that it is easier for children to listen to or identify just the beginning letter of a word. But more than this, it is an error to mislead children into thinking that they only have to listen for the first sound. Children need to hear sounds in all parts of a word. Therefore, in the Montessori approach, the children are led to hear how the sounds they are learning occur in different parts of words. With this practice they soon begin to realize the sequence of sounds in words.

The teaching of the sounds and letters is through a multi-sensory approach. The child will hear the sound, see its representation in the form of a letter, and feel the way it is written as the child feels the letter with his fingers. Since a motor pattern should be learned correctly the first time, it is very important that the child trace properly formed letters. This will help him develop a good pattern for handwriting. Therefore, a basic form of the cursive letter is used. In this way, when a child changes from writing the letters without connecting strokes to a connected cursive style, rather than change his motor pattern by changing from a ball and stick form of letter to a more flowing curvilinear letter, the child will only have to extend the pattern of writing he is already using by adding connecting strokes instead of also having to reform the letters. As a result, the only difference for the child between his “print” and his “cursive” writing will be the addition of the connecting strokes to complete the cursive style.

TwitterFacebookPinterestLinkedinEmail
This entry was posted in Educational games. Bookmark the permalink.